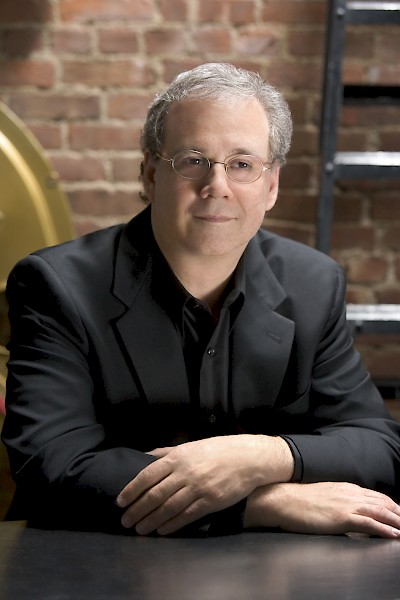 Over a career spanning more than four decades, composer LOUIS KARCHIN has amassed a portfolio of over 95 compositions, appeared as conductor with numerous performing ensembles, co-founded new music groups, including the Chamber Players of the League-ISCM, the Orchestra of the League of Composers, the Washington Square Ensemble, and the Harvard Group for New Music, and overseen the formation of a graduate program in music composition at New York University. His works have garnered distinguished honors, including three awards from the American Academy of Arts and Letters, a Guggenheim Fellowship, four National Endowment for the Arts Awards, and Koussevitzky, Barlow, and Fromm commissions. A citation from the American Academy praised his Songs of John Keats as “a striking conception, in which the sonic properties of the poetry interact with musical material in unprecedented fusion.” The New Yorker hailed Karchin as a composer of "fearless eloquence,” and the British music journal, Contemporary Music Review, singled out Karchin as one of twenty-five of the most exciting American composers born in the decade of the 1950's. He was selected as one of 53 composers to represent New York at the turn of the millennium in the Chamber Music Society of Lincoln Center's "Great Day in New York" Festival at Alice Tully Hall.

Karchin’s first opera, Romulus, received its premiere in May of 2007, at the Guggenheim Museum’s Peter B. Lewis Theatre and is now available on a much-heralded 2011 Naxos release. His second opera, Jane Eyre, based on the Charlotte Brontë novel, was premiered by the Center for Contemporary Opera in New York in October, 2016, with soprano Jennifer Zetlan and tenor Ryan MacPherson in starring roles, and is now available on a critically acclaimed Naxos double-CD with the original cast, the Orchestra of the League of Composers, and the composer conducting. Performing and sponsoring organizations championing Mr. Karchin’s music have included the Chamber Music Society of Lincoln Center, Tanglewood, Carnegie Hall, the Louisville Orchestra, The Fort Worth Opera (TX), the Da Capo Chamber Players (NYC), the Plurimo Ensemble (Venice, Italy), Spectrum Sonori (Seoul, South Korea), the Delta Ensemble (Amsterdam, Holland), Earplay (San Francisco, CA), Voices of Change (Dallas, TX), the New York New Music Ensemble, and the Portland (ME) Symphony. Soloists have included Lucy Shelton, Fred Sherry, Rolf Schulte, Stephen Gosling, Steven Beck, Miranda Cuckson, Thomas Meglioranza, and Marilyn Nonken, among many others. His music is published by C. F. Peters Corporation and the American Composers Alliance. CDs of his works are available on Bridge, Naxos, New World, Albany and New Focus labels. Mr. Karchin has been Composer-in-Residence at the Composers Conference at Wellesley College, Indiana University, the University of Buffalo, the University of Iowa, and the University of Utah, and he has presented master classes at Harvard, Columbia, Boston, Brandeis, Cleveland State, and Rutgers Universities, as well as the Juilliard School, Westminster Choir College, the Manhattan School of Music, Mannes College, and Queens College, CUNY. In 2010, he was a guest composer at the Etchings Festival in Auvillar, France.

As a conductor, Mr. Karchin is Music Director of the Orchestra of the League of Composers, and with them has conducted New York or world premieres of works by Elliott Carter, Joan Tower, Charles Wuorinen, David Rakowski, Arthur Kreiger, Missy Mazzoli, Julia Wolfe, and Milton Babbitt, among many others. He is also a conductor of the Washington Square Ensemble and the Chamber Players of the League–ISCM.

Mr. Karchin lives in Short Hills, NJ, with his wife, Julie Sirota Karchin, and their daughters, Marisa and Lindsay.

Hailed as a composer of “fearless eloquence” (Andrew Porter, The New Yorker), Louis Karchin has been honored with performances of his music throughout the United States, Europe, and the Far East. He has been championed by such organizations as the Chamber Music Society of Lincoln Center, the Fort Worth Opera, the Center for Contemporary Opera, Tanglewood, the Guggenheim Museum, the Louisville Orchestra, the Group for Contemporary Music, the Da Capo Chamber Players, the New York New Music Ensemble, and many more. His music is recorded on Bridge, Naxos, New World, Albany and CRI labels, and his compositions are published by C. F. Peters Corporation and the American Composers Alliance. Mr. Karchin is the recipient of numerous awards for his work including Koussevitzky, Fromm and Barlow Foundation Commissions, a Guggenheim Fellowship, and three awards from the American Academy of Arts and Letters.

Active as a conductor, he has founded or co-founded noted performing ensembles including the Harvard Group for New Music, the Chamber Players of the League-ISCM, the Washington Square Ensemble, and most recently, the Orchestra of the League of Composers. He is Professor of Music at New York University.