Romulus is a comic opera in one act, based on a play of the same title by Alexandre Dumas, père. The libretto was adapted by the composer from a translation into English by Barnett Shaw, Chevalier dans l’ordre des Arts et des Lettres.

“The music…..seemed to unfurl in a ceaseless strand of gentle lyricism, filled with timbral variety and punctuated by passages of puckish humor that deftly mirrored the stage action. Mr. Karchin conducted members of the Washington Square Ensemble in a lively, polished performance…..The performers sang excellently, their clear enunciation a particular boon. Jesse Klug´s subtle lighting was especially effective when Wolf confessed his passion for Martha near the conclusion. The briskly paced comedy fell a few minutes short of an hour. I would have happily stayed to hear it performed again.”

Romulus, a one-act comic opera by Louis Karchin (b. 1951), announces its originality right out of the gate with its short, whimsical instrumental introduction and sustains it through to the very end of its seventy-two-minute running time.

(From The Road to Romulus, a full-length article on the making of the opera and its premiere production, sponsored by the Guggenheim Museum in New York. It includes interviews with Mr. Karchin and members of the cast.)

Fanfare Magazine (“Want list” for 2011)
"….. terrific comic opera released on Naxos in a beautiful composer-led performance by the Washington Square Ensemble. I saw the premiere production at the Guggenheim
Museum in New York City, and I was riveted by this wonderful work. Writing a good, tight comic opera is exceptionally difficult to do, but Karchin succeeds admirably, having adapted his own libretto from the play by Alexandre Dumas père. It was a real triumph on stage, and it’s an unmitigated pleasure to revisit it here on recording."

"Louis Karchin (b. 1951) has based this comic gem on Alexandre Dumas's mixture of dubious paternity and political intrigue. Karchin states that he has tried to emulate the
effortless, seamless flow of Richard Strauss and Wagner. He succeeds admirably. It does not sound like Strauss or Wagner’s music, just the seamless flow. The melodies are
memorable, those “take-home” kind of tunes so obviously missing from contemporary opera. It’s a gem of an opera and a gem of a performance."

"Karchin’s instrumental palette is rich, varied and often stunning. The emotion that Karchin’s orchestration and instrumental effects produce, whether they be audiophile
drums grabbing centre stage or chimes describing the more esoteric aspects of the dramatic argument, gives rise to moments of striking beauty and visceral excitement that
inform and colour the opera. Katrina Thurman soars, exclaims and declaims as necessary. Hers is a remarkably vibrant voice."

(One of 4 “U. S. picks” for September, 2011)
"Romulus exudes bright humour. Comic opera has rather languished lately, not least because so much modern music appears purpose-built to banish humour. In Romulus,
though, Philadelphia-born composer Louis Karchin sets a genial vignette by Alexandr Dumas, père. His music, though modernistic in jagged rhythms and free-ranging tonality,
is bright, and he aims for a Straussian flowing line….It’s fun, with excellent young performers, and distinctly promising."

"The composer translates the conversational chattiness of the libretto into music with naturalistic diction and the inflections of the master dramatist. Karchin’s incredibly
precise use of his 11-piece chamber orchestra [captures] the characters’ busy intellects – and the thawing of their cerebral chilliness as the opera progresses. The studio-made
recording is beautifully produced and performed in a dramatically adept, diction-perfect cast headed by the superb Thomas Meglioranza."

"Karchin’s music is distinguished by harmonic clarity, and is enhanced by a truly glittering orchestration, which gets great variety and sonority from an 11-piece chamber
orchestra. It sparkles, but it never gets precious in its beauty. The vocal writing is similarly direct and clear. Like most composers of his taste and generation, Karchin
doesn’t tend to write set-piece arias that might be stand-alone songs, but neither does he write the sort of gray perpetual recitative that makes so much contemporary opera dreary.
The music crackles along, and the text setting always seems appropriate to the quickly changing action. It’s an interpretive approach that reflects a close, moment-to-moment reading of the thoughts and emotions of the characters. It also is quite wonderful vocally (and this also is a result of excellent performers) in that it’s almost possible to make out
the entire text without aid of a libretto. It concludes with a genuine full cadence that doesn’t sound fake; rather it seems like a final, teasing joke in the high intellectual spirit of the two bachelors. Overall, I find it a real contribution to the tradition of short comic opera, a repertoire that is all too neglected in comparison to the grand and often bloated neo-Hollywood spectacles foisted on us nowadays. The performance (conducted by the composer) radiates wit and energy, both vocally and instrumentally. Bravo to all involved." 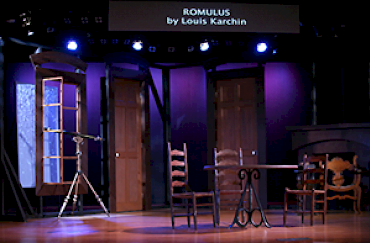 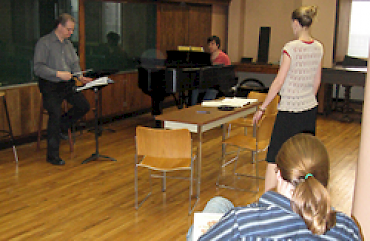 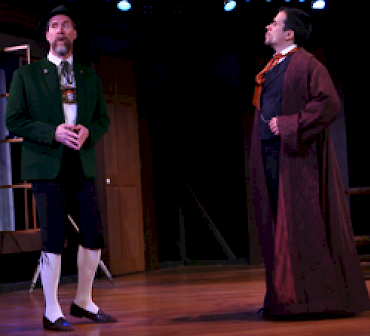 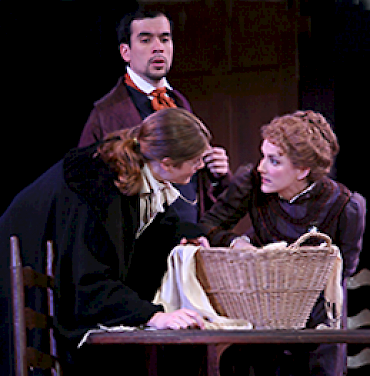 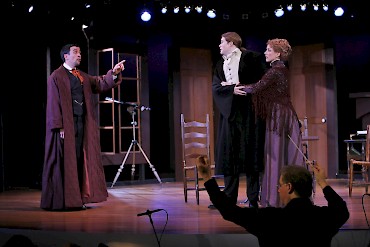 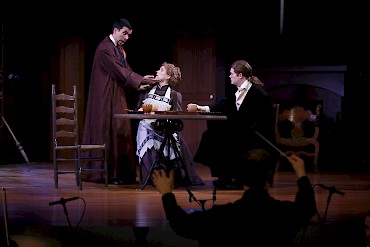 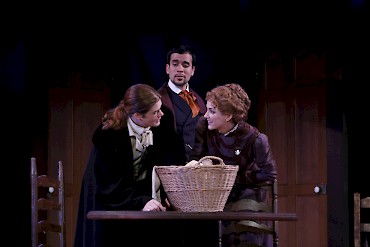