Boston pianist Stephen Drury premiered the Sonata-Fantasia at the height of the Omicron wave of the Covid-19 pandemic in January of 2022. The piece is in four parts played without pause; further, much of the music of the 1st section returns in the last one. The opening section is alternately declamatory and propulsive and leads into a lighter but equally energetic 2nd part, with a recurring theme in triplet rhythm centered on E flat that builds to a climax on an E Major chord overlaid onto a G sharp minor one. The air clears for a slower, more atmospheric 3rd part that sustains momentum with trills that form their own melodies and then transforms into a stately march. A second climax leads to the final section, introduced by a short, rhythmically incisive motif (this was the first idea I imagined in the creation of the Sonata). Further new motifs gradually arise and then begin to blend into the opening material to round out the form. The Sonata-Fantasia lasts approximately 15 minutes.

Sometimes collaborations span multiple decades. Stephen Drury and I have known each other for over 50 years, and the premiere of my Sonata-Fantasia is the latest of quite a few projects we have undertaken together. Steve and I met at Tanglewood in 1972. At the time, he was in the Boston University Tanglewood program for high school students, but would sneak into the composition seminars of the fellowship program of the Tanglewood Music Center to learn more about new music. We became further acquainted immediately afterwards, when we both lived and studied in Boston and Cambridge, and then re-met in 2011 when I had the pleasure of conducting my Chamber Symphony at Tanglewood, and Steve was now a member of the Tanglewood faculty, performing and coaching chamber music, with particular emphasis on new music. Since that time, we have kept in touch steadily as colleagues and friends and recently, Steve surprised me by uncovering the photo below. 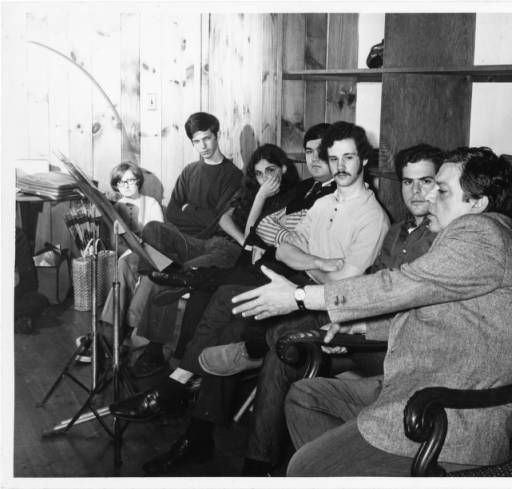